If you’re like me you’ve been stuck in annoyingly slow traffic on Highway 65 between Lincoln and I-80 (happens to me almost daily). But did you know about the Placer Parkway project, and that it is already underway? 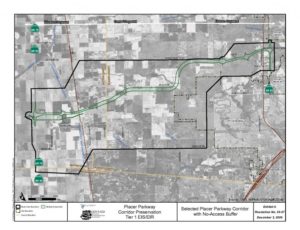 Once completed the $660 million new highway will travel 15 miles, from Highway 65 at Whitney Ranch Parkway in Rocklin all the way to 70/99 near the Sacramento Airport, and was designed to take cars heading that direction off of 65 in Roseville, and ultimately I-80 West. A much-needed relief for that corridor!      The first phase, which was approved by the Placer County Board of Supervisors in 2015 (originally planned for way back in 1994), is already underway. Beginning with the new overpass at Whitney Ranch Parkway (which you may notice currently goes nowhere when heading east) the city of Rocklin helped complete last year, Phase 1 will complete the Whitney Ranch interchange at 65, and extend east to North Foothills Blvd. Completion of Phase 1 is not expected to be for a couple more years, but the wheels are turning as we speak.